Crystal Vision is our tool to aid you in experiencing more positivity on this Earth Plane. We were guided to include a crystal grid with our music to help expand and accelerate the collective manifestation of a loving tomorrow. 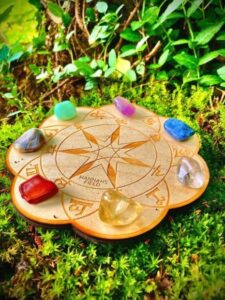 HannaH's  Field is "bringing their mix of jam-band, drum-circle, healing-chant, beach reggae, and gypsy folk to audiences who are open to the idea of sound waves and music as a form of sonic medicine that works through vibrations..... "

Nominated best female vocalist in Hartford for many years, this powerful songstress has shared the stage with such great acts as Derek Trucks, Sound Tribe Sector Nine, the Average White Band, Donna Jean from the Grateful Dead, the Samples, Gov't Mule featuring members of the Allman Brothers Band, Indubious, Dub Apocalypse, Spiritual Rez and The Brothers Johnson.  They have performed at  festivals such as The 50th Anniversary of Woodstock, Unifier, Ziontific and Project Earth.

The band's last release, Revolutionary Soldiers, featured Brett Wilson of Roots of Creation and had songs in regular rotation on SiriusXM, The Joint. Their music also charted #11 on Relix/Jam Bands radio chart.

Their newest album, Crystal Vision, is truly an offering for the ages.  Within the perils of our current affairs, the world is in dire need of healing.  This collection of song elixirs promotes a message, a proclamation of light and love for uncertain times.