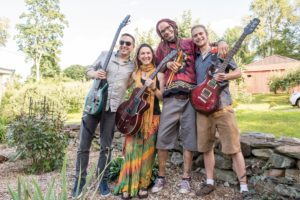 Founded in 2000, HannaH’s Field is a breath of fresh air in the New England music community. They have brought love and hug vibrations to festivals such as The 50th Anniversary of Woodstock, Unifier, and Harry Browns Harvest Ball and Ziontific. Originating as a solo project, Hannah released “Inside A Song” in 2004. Later as fate devised, she met her life partner Bliss, while attending the Hartford Conservatory of Music. Bliss auditioned to be HannaH’s drummer and they never looked back. They created songs and stories for 10 years, until the addition of guitarist Aidan Moore and bassist John Pitblado, and thus co creating the full and lively sound you hear today.

HannaH, founding member of HannaH’s Field, is the fearless leader of her Band of Revolutionary Soldiers. Sending serenity through sound waves she has been nominated best female vocalist in The Hartford Advocate for multiple years. After 6 Studio Albums to date, she finds solace in teaching Spiritual Life Skills, music and voice, to those who seek to expand. HannaH is a shining example of what a great Female Role Model looks like for young women to look up to everywhere.

Chef Bliss lovingly embraces being the Pulse of HannaH’s Field. Drummer and accomplished holistic chef, he never fails to bring a smile to audiences nationwide. As a master carpenter he prides himself in the tour bus(“Trinity-Ites”) that he built out for the band, which has been their chariot for several cross country musical journeys.

John Pitblado “ Jah Pitts” : HannaH’s Field official Astronaut, he brings the funk with each Bass line. Also contributing to HannaH’s Field side project, High Tide: A Tribute to Bob Marley, Jah Pitts brings a fusion of reggae bass riffs and jam rock to the band that transcend dimensions. He began playing in the early 90s with Uncle Juice who supported bands such as The Samples and Ziggy Marley.

Aidan Moore “Little Lion”: An exemplary guitarist, Little Lion steals the stage with each solo. He is influenced heavily by the Grateful Dead, and his flowing style reflects that. He prides himself in being in a band of individuals out to make a change, and backs each one up with his attention to musical intention every time. His older brother sold some of his own DJ equipment to buy Aidans first guitar when he was 10 years old, and he hasn’t stopped playing since!
HannaH’s Field joined forces to create their second studio album with this full band called, “Crystal Vision”.